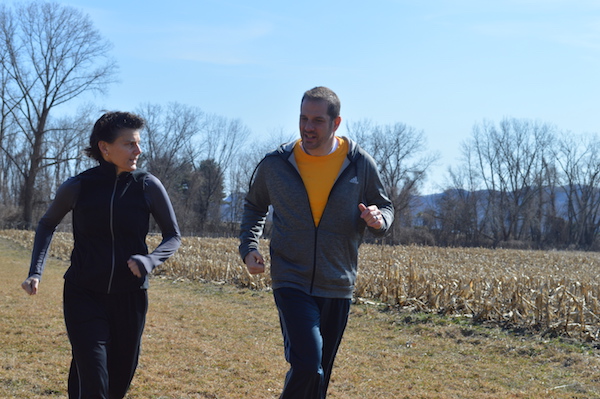 At Olin Lippiello LLP, we say that we go the “extra mile.” We ascribe a lot of meaning to that phrase. Figuratively, it means that we walk alongside our clients, carrying their burdens with them, and helping them make decisions. We don’t farm out our cases. We return phone calls. We answer emails.

Literally, however–and we mean literally–we are fans of mileage. As in running. As in, a lot of running. Our shared interest in running provides a consistent core for our firm’s mission of going the extra mile.

Thirty years ago this Spring, Nate captained the Youngstown (Ohio) Liberty High School‘s track team as, you guessed it, a miler. He did other events too, including relays, cross country, and the high jump. But the iconic mile race (four laps around the cinder track) was his forte. (Fans of Roger Bannister know what we mean.) Nate wasn’t breaking any records, mind you. But, if asked, he is always proud to show you the recorded 4:38.9 he notched in 1987: Around the same time, Lisa had just finished her college sports career with the varsity softball, volleyball and swim teams at Hunter College.  She was moving on to the individual sport of triathlons. She competed around the United States in various distances, but found her passion in the half-ironman: a 70.3 mile race consisting of a 1.2 mile swim, 56 mile bike race and a 13.1 mile run: Flash forward to the mid 2000’s. Nate was the career law clerk to a United States Magistrate Judge, while Lisa–who was transitioning her career from New York City law enforcement to the study of law–scored a coveted internship in the chambers where Nate worked. We both had young families, and not much time for anything else, but we talked a lot about running. Nate was competing mostly in 5Ks and Greater Springfield Harriers events, while Lisa was a competitive triathlete.

While our legal careers grew in different directions, we kept in touch. And when we met, we’d talk about the practice of law, our philosophies of helping clients, and running. Then, when the time came to merge our forces and create a new law firm, it seemed obvious. We were running lawyers — running to meet clients, to make arguments in court, to file papers, and always, running to serve others. We quickly decided that we would from henceforth be known as the lawyers who “go the extra mile.”

As Nate was unpacking his office supplies in his new Olin Lippiello LLP office, he stumbled on a book he forgot he had received–more than a decade ago–from Lisa: As its subtitle notes, The Quotable Runner, edited by Mark Will-Weber, shares great moments of wisdom, inspiration, wrongheadedness, and humor. Many snippets from this fine book apply to each of us, and maybe to you. But here is one we find particularly apt:

“If you want to become the best runner you can be, start now. Don’t spend the rest of your life wondering if you can do it.” – Priscilla Welch, masters marathon great.

Ready to Get Free Consultation For Cases